we are born to shine

"Nothing will be saved without you."

My position on Climate Change.

<
>
Written in 2000: Here's where I stood 20 years ago... the blog post from my church newsletter.
I've bolded parts that really stand out for me today.

Looking at the Son.
While you’re focused on just living your life an apocalyptic drama is playing itself out – with you as a principal actor – with each mail delivery that brings the newsletter, each page of it you turn, each light you have on to read by. These are the last days of Ancient Sunlight. And we will see it end 30 – 50 years from now, when we’ve burned the last bit of the known supplies of oil on the planet.

Oil is Ancient Sunlight because it is created from the compressing of once-living matter deep under our soil and oceans. A little more than a century ago we figured out how release this captured fuel. The discovery basically put an already-dangerous world view into warp speed so that in the span of one, long lifetime we are now locked in a lifestyle that is wiping out hundreds of species of a day, not to mention making humans thoroughly dependent on a disappearing resource.

And that’s not the disturbing part of the drama. It’s that we shut our eyes to it – because of our particular, dominant cultural view.

You see, as Thom Hartmann, author of “The Last Days of Ancient Sunlight” says,

​“Our problems derive not from our technology, our diet, violence in the media, or any other one thing we do. They arise out of our culture — our view of the world. The reason most solutions offered to the world’s crises are impractical is because they arise from the same worldview that caused the problem. Recycling won’t save the world, birth control won’t save the world, and saving what little is left of the rainforests won’t save the world… Even cold fusion and the elimination of the need for oil, with free electricity for everybody in the world will not “save the world”. Nothing but changing our way of seeing and understanding the world can produce real, meaningful and lasting change… and that change in perspective will then naturally lead us to begin to control our populations, save our forests, re-create community and reduce our wasteful consumption.”

It is particularly fitting to be writing about this in a church publication because I believe our current cultural view was fueled in great part by the humanifest destiny message of the Old Testament. Humans around long before then were able to sustain and nurture life for generations. But then, a particular type of culture arose, which believed that “man shall have dominion over all the earth.”  That cultural vision didn’t support the concept of “live and let live”. It was more like, “live like us or die.” And this particular tribe grew and grew and grew until now, having succeeded so well in having dominion, it’s wiping out any cultural dissent, streamlining itself right out of existence for lack of the diversity necessary to sustain life.

Look at how dependent we are on fossil fuel for everything. Look at how everything in  our houses runs from electricity that originates with fossil fuel. The food that gets to our supermarket travels an average of 1300+ miles on fossil fuel vehicles to get there.  Your car, if it's like mine, logs more than 15,000 miles a year which at 20 mpg is 750 gallons a year. Our clothes are either made of oil products, or the cotton and wool are harvested with oil's help. We fly on planes that use thousands of gallons of fuel. Our kids play with petroleum-based plastic toys. Even the computer I'm using is made from  and powered by fossil fuels.

In just one generation, look at what we have lost. Most of us wouldn't have a clue how to preserve food, how to build a good cooking fire, how to make land produce food, how to sew, knit, harvest. We're all specialists now. We specialize in making as much money as possible by doing one thing so that we can buy whatever we need. We don't really share our specialties with one another - who has time - unless there's remuneration. There's very little exchanged except money.

"From a few thousand barrels of oil per day in 1900, we've increased our appetite for oil to 72 million barrels per day in 1997. Human  population has increased exponentially, from 350 million at the turn of the last millenium, to 1.6 billion at the turn of the 20th century, to almost 6 billion today (ED Note: 6 billion as of October 12, 1999). And just about every single one of them wants a car. "If the world follows the Western model of one car for every two people, we will have 5 billion cars by mid-21st century, boosting our fuel consumption to one trillion barrels per year. Ironically, one trillion barrels is the current estimate of the total amount of oil remaining to be extracted from the Earth. No one really expects oil to be around by 2050. 80% of the oil produced today comes from fields  discovered before 1973, and the U.S. Congress' Office of Technology  Assessment estimates that all known oil reserves will dry up by 2037.
​
"There are signs that the stage is set for positive change, though they  are fewer and farther between than we may like. Sales of organic food grew 19-fold, from $180 million in 1980 to $3.5 billion in 1996...  Big Business is acknowledging the threat of global warming, and  taking a grudging look at renewables (sources of energy)... Real Goods and like-minded individuals around the world, must continue  to steer the course of society toward that fruitful and fullfilling future, and our efforts need to strongly accelerate in the new millenium. The  legacy left us by the Century of Oil is dismal, and the times they really do need a changin' - at warp speed."

How can things look so good and be so bad? Well, that's just about a whole other story (the media and who really drives it), but it has to do with the same energy that keeps us from individually making changes like going on a diet - we just don't want to face it.  Also, we need to look big picture, and we tend to focus only in our little decade of the moment. If we address this out loud in 2000 rather than 2037, we can have much more impact on steering a good course, rather than waiting to be hit by the iceberg.

The biggest reason to be big-picture thinkers: Our children. My daughter will be my age in 2037, perhaps with children of her own. Why did I ever let her be born if I'm not doing everything possible to leave her with a life?

In the month or two since my eyes have opened, I have taken some small immediate steps: buying less packaged food, making our own bread, being religious about reusing things. I'm educating my children a little each day. I'm surfing the web and gaining confidence in the fact that so many people are already doing what needs to be done -  and they're eager to teach me what I need to know to make a difference.

Short-term, we're cutting our electricity consumption, reducing the amount of grass on our property and upping the native plants (no more electric mowing, blowing, watering). We've cut way down on packaged foods. We hit a milestone in our house last week - we had one bag of trash for the whole family for the whole week. We recycled more than we wasted.

Long-term, I'm laying plans to retrofit or build a completely self-sustaining house and life. We may also either join or begin a self-sustaining community of neighbors, if we find like-minded individuals. I'm looking for alternative fuel companies to invest in. I am buying stock in corporations that are addressing their long-term impact while delivering their goods or services. I am beginning the social activism work that holds  corporations responsible for "picking up their messes" and addressing sustainability issues themselves. I am also eager to share with you the many things I am learning in detail. If any of you  are interested, we could start a study group.

It's absolutely overwhelming. But I don't know what else to do except try and make a difference. I send this information out to you now, because I believe that the more we wake up together, the more we can work together, and the more hopeful will be our future. So, thank you for your attention. The more people know, the more there is reason to hope. You know how intense and successful Americans can be when they've got a collective vision. ​​​​​
Greta is doing what she has the power to do. What do you want to have the power to do? . Lessons from a natural. 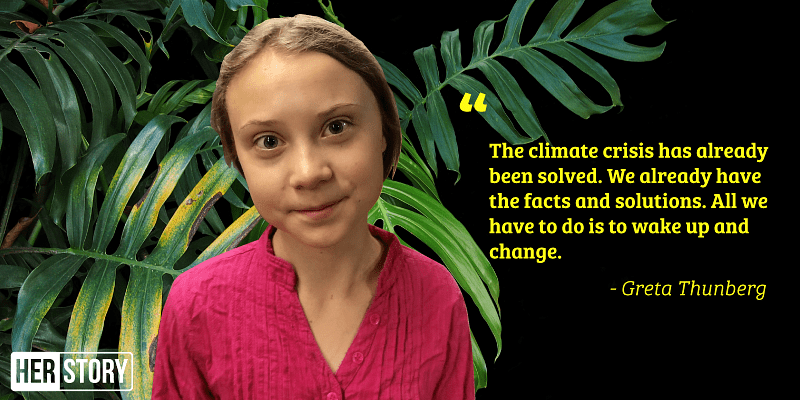